In 2015, an investigation by Four Corners exposed the greyhound racing industry to be rife with animal cruelty: live baiting, deliberate and systematic overbreeding of dogs, and cheating on a grand scale. So why is the NSW Parliament handing over half a million dollars of taxpayers’ money to fund the ‘World’s Richest Greyhound Race’?

Find out more about greyhound racing in NSW and how you can make a difference.

In February 2015, an investigation by Four Corners exposed the greyhound racing industry to be rife with animal cruelty, with practices like live baiting, deliberate and systematic overbreeding of dogs, and cheating on a grand scale. So why is the NSW Parliament handing over half a million dollars of taxpayers’ money to fund the ‘World’s Richest Greyhound Race’? We believe the industry has not cleaned up its act since then and call on the NSW Parliament to ban it once and for all.

Following the airing of the Four Corners documentary, things were looking up. A Special Commission of Inquiry, led by the Honorable Michael McHugh AC QC found overwhelming evidence of live baiting, and other forms of animal cruelty including wastage, and recommended the industry be shut down in line with community expectations and a growing worldwide trend for the practice to be banned. (1)

But then, after pressure from the National Party, Murdoch Media, and a looming byelection in a seat where racing was a popular past time, the NSW Parliament did a backflip and the races were back on, bigger and richer than ever, even receiving Government handouts in the midst of a severe economic downturn. But there were conditions; the industry had to clean up its act otherwise there’d be consequences. A new governing body called the  Greyhound Welfare Integrity Commission (GWIC) was established to enforce animal welfare standards, including reducing the number of dogs bred to reduce wastage, cutting down the number and severity of injuries, ensuring race tracks were modified to provide better conditions for dogs, monitoring industry dogs at every stage of their life cycle to make sure appropriate attempts are made to re-home retired or unsuitable dogs, and ensuring live baiting was no longer practiced. (2)

So what really has changed?

After carrying out our own investigations, we believe not much at all.

One of the main conditions for the industry to stay in business is that the rate of injuries were to decrease. However, data provided by the Greyhound Welfare Integrity Commission’s 2020 report shows that, despite a fall in the number of catastrophic injuries, the overall rate of injury has actually increased. The number of minor injuries has been steadily increasing and medium and major injuries remaining fairly consistent. (3) 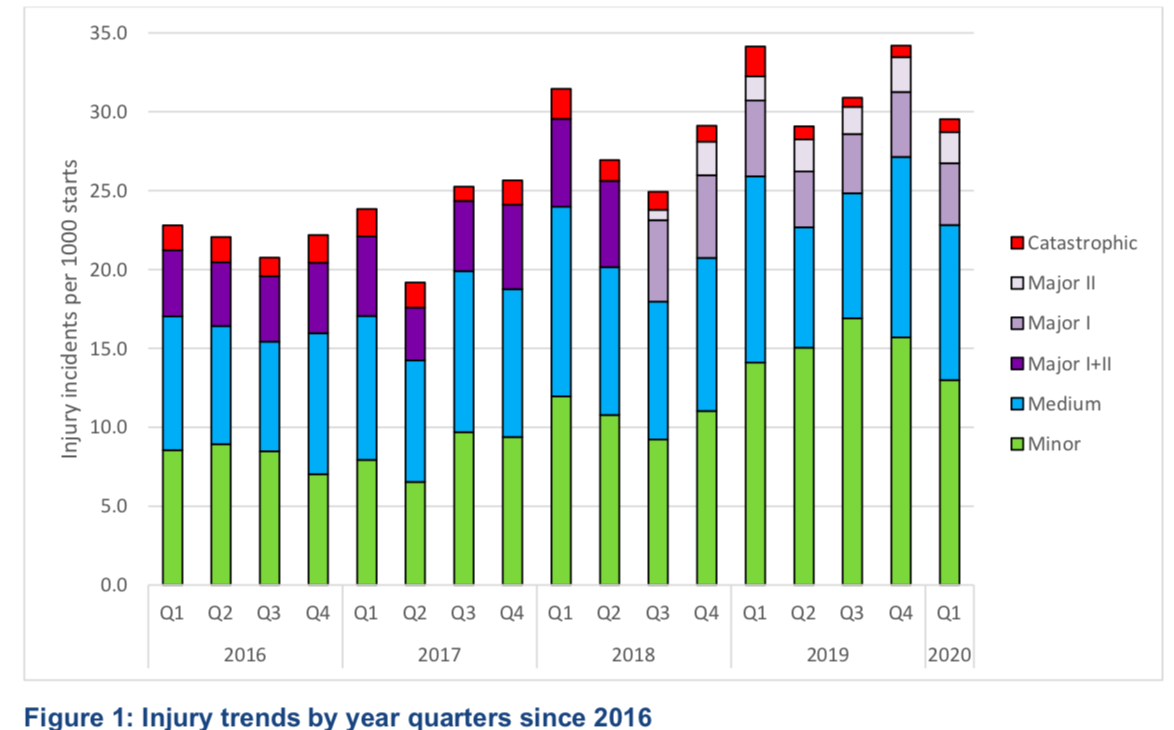 One event that caused particular concern was the initial TAB meeting for the Taree branch of the NSW racing club, which celebrated its first meeting on the 17th June 2020 with 21 injured greyhounds in one meet. (4)

A significant factor in the number of deaths and injuries on racetracks has been the design of the race track itself. In 2017, the University of Technology undertook an investigation into how to make racetracks safer and recommended straight tracks instead of circular ones, extended lure systems to prevent injury, and reducing the number of participant dogs from 8 to 6. (5)

Despite the government agreeing to improving track safety there is not a single straight track in NSW, races are not limited to 6 dogs per race and the extended lure has not been introduced.

The Greyhound Reform Industry Panel made a number of specific recommendations to ensure welfare for greyhounds over their full natural life and putting the onus on owners to get dogs rehomed if they are unsuitable for racing or once they have finished their careers. This meant a register for dogs over their whole life cycle.(6) Sounds good, but it provided an out clause for owners by stating the register ‘should not include greyhounds that retire or are retained by non-industry participants’, meaning the term ‘greyhound’ only refers to one that ‘is owned or kept in connection with greyhound racing’. This means owners can dispose of unwanted dogs by claiming they’re not industry participants. In other words, you can hand your greyhound over to a neighbour who is allowed to hit it over the head for you, and the GWIC has no legal authority to track the dog’s welfare. An investigation by the Coalition to Protect Greyhounds estimated that between 2017 and 2019, 7,560 dogs were unaccounted for. (7)

The grisly discovery of a mass greyhound grave in Marsden Park discovered in 2018 may provide some clue as to the fate of some of these missing animals. (8) Either that or they could have been sold to organisers abroad, where animal cruelty laws are much more lax than here.

For those of us who watched the Four Corners expose, few can forget the gruesome sight of professional trainers using live animals like piglets and possums as live bait, strapping them down to lure while encouraging dogs to eat them alive so dogs could get the taste for blood. As one trainer explained,

"…if you can entice them, some, some trainers believe you, you can make them angrier, more aggressive; um, that that is a way to improve a dog's racing ability."  (9)

The McHugh Inquiry found that up to one fifth of trainers used such methods to train dogs.(10) However, industry insiders and animal rights welfare groups have claimed that it’s more likely around 90%.(11)

As a result of the Inquiry, the practise was banned but as Michael McHugh QC says,

“Given these views, and the highly entrenched nature of live baiting as a traditional training method, there is a very real risk that, once the harsh spotlight of this Commission is removed from the industry, the practice of live baiting will thrive once more." (12)

As Lyn White from Animals Australia put it, ‘Putting together animals, gambling and prize purses is a toxic mix’. (13)

What Needs to be Done?

The Greyhound Racing Act is currently under review, and while public submissions closed in August, our MP Mark Pearson and Young AJP continue to campaign against greyhound racing cruelty in the hopes of shutting down this cruel industry for good.

Young AJP have approached Minister Kevin Anderson, calling for the following changes to the Act:

Greyhound racing must be banned, but while our government allows this so called ‘sport’ to continue in NSW, we all must continue to fight to protect these dogs from further harm.

How Can You Help?

Every dollar that is wagered greyhound racing legitimises this so-called "sport". It increases the industry’s revenue and sends a message to others that gambling on greyhounds is socially acceptable. Help share the truth about greyhound cruelty with your friends, family and colleagues, and encourage them not to bet on the lives of these suffering dogs.

The Animal Justice Party relies on support from people like you to continue the work we are doing. Your support and membership fee go towards helping us put animals on the political agenda and letting the NSW Government know we are unified in helping to end animal suffering. You can click HERE to find out more about memberships.

4. Coalition for the Protection of Greyhounds, June 2020, ‘21 injured greyhounds: an “outstanding success” at Taree’