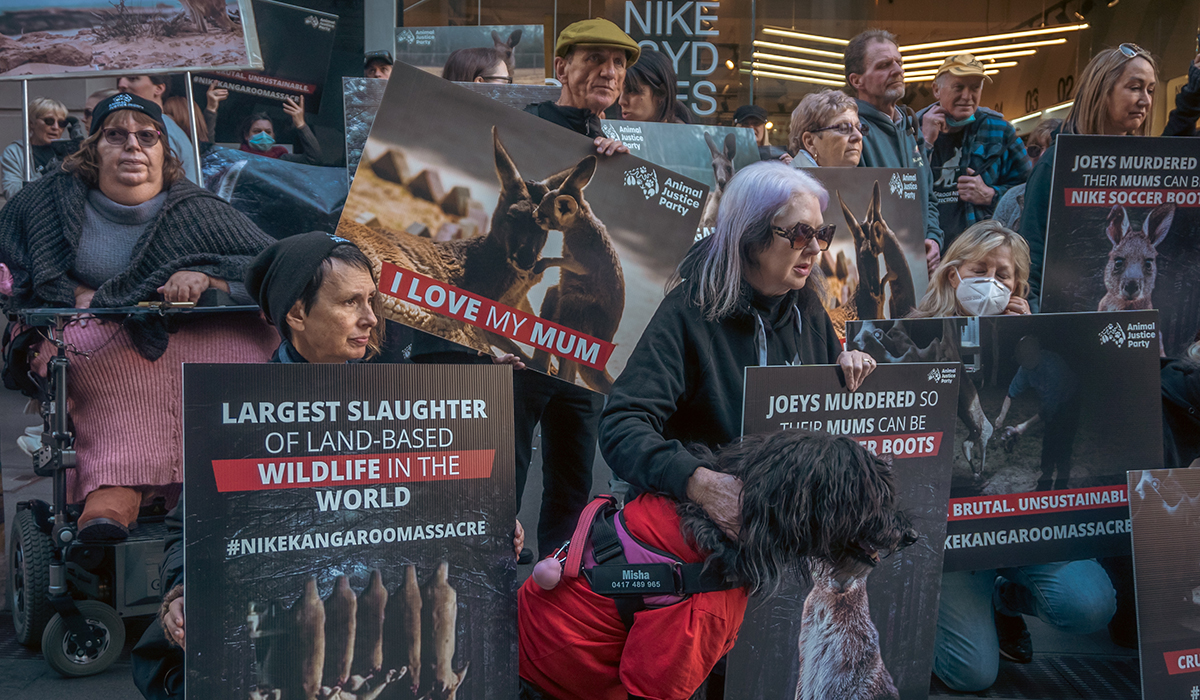 Nike continues to ignore 15 of Australia's most prominent voices for animals, who've asked them to drop "k-leather"

“Joeys who eventually curled up with their cheeks pressed against their mother’s severed head, breathing in the familiar, comforting scent of her mouth as they died of cold, confusion and fear, their tiny hearts breaking…I have seen it with my own eyes.”

Today in Sydney, Melbourne, Brisbane and Adelaide protesters gathered outside Nike stores to demand they drop their line of kangaroo skin shoes. This follows on from a series of #Nikekangaroomassacre protests in the USA, in Los Angeles, Portland and New York City.

Australia’s kangaroo industry is the largest slaughter of land-based wildlife on the planet, and, with Nike being one of the largest buyers of kangaroo skins in the world, which they use to make “k-leather” football boots, they play a key role in driving the industry.

Outside the Nike flagship store in Sydney, wildlife rescuer and Animal Justice Party Regional Group Leader Greg Keightley shared what he has witnessed firsthand. “As a wildlife carer I’m all too familiar with the suffering caused by the legalised cruelty of Australia’s commercial kangaroo industry,” Mr Keightley said. “Many of us have witnessed and rescued kangaroos who have been shot in the mouth or the shoulder, their arms hanging off, joeys who have been left to fend for themselves after watching their mothers and fathers hung on hooks, then driven away on the back of filthy trucks.

“I have seen so many kangaroos hanging on hooks by a hole cut through their leg, upside down, writhing and struggling to get free whilst the harvester thrusts a knife into their throat.

“I have scoured paddocks for injured and orphaned kangaroos, stumbling across butchering sites where joeys have searched in vain for the safety and warmth of their mother’s pouch. Joeys who eventually curled up with their cheeks pressed against their mother’s severed head, breathing in the familiar, comforting scent of her mouth as they died of cold, confusion and fear, their tiny hearts breaking.

“I have seen it with my own eyes.”