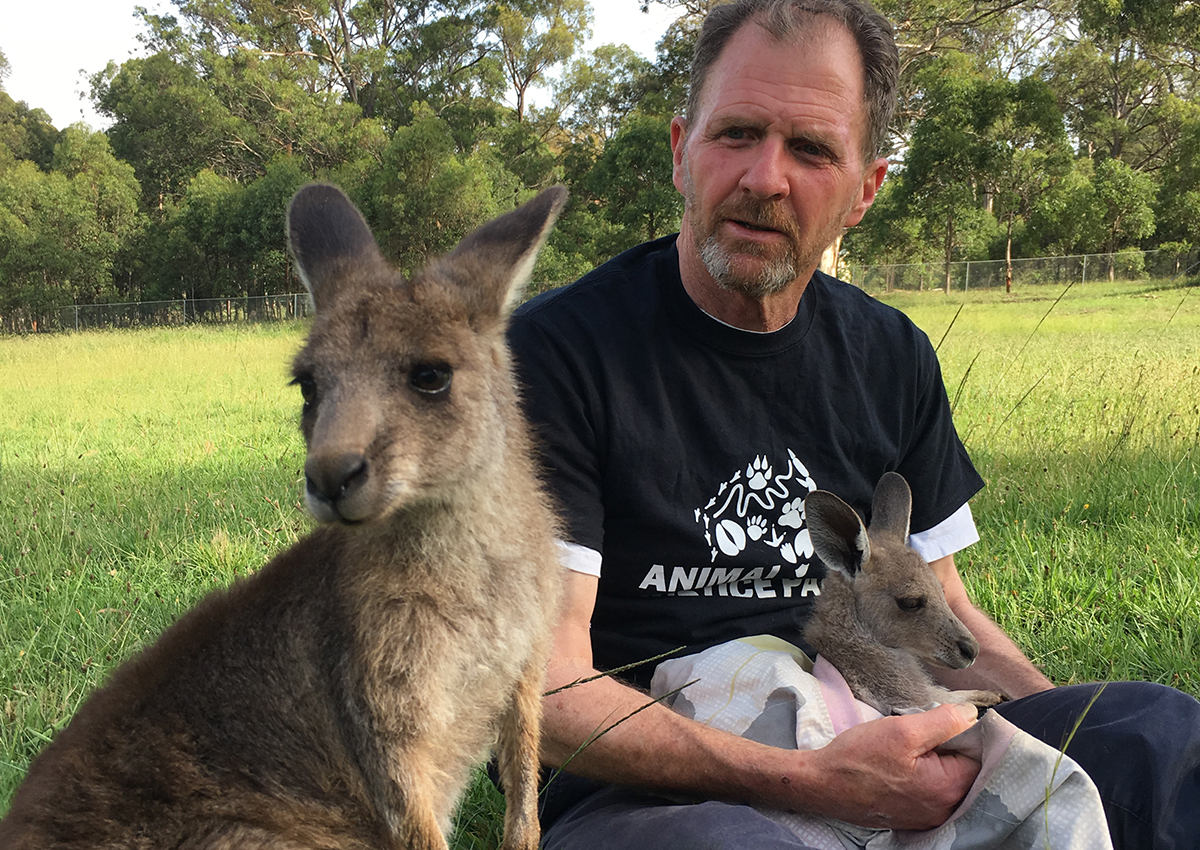 In honour of Father’s Day, we sat down with Greg Keightley who has been a wildlife rescuer and carer for over 20 years. Greg is also the leader of the Animal Justice Party’s Blue Mountains group, and runs a wildlife sanctuary on his property with his partner Diane.

Australian wildlife is in crisis right now and wildlife carers are inundated. Greg has cared for orphans of all species: magpies, kookaburras, possums, wombats, cygnets, owlets, ducklings, galahs, gliders, and even some baby pelicans.

But he and Diane specialise in kangaroos and wallabies, and by this point, they have cared for hundreds of orphaned joeys.

“They’re all different as individuals and they all have different needs. Some of them are big sooks and some of them are quite independent and sassy. They often need a lot of love and care and cuddles, and you need to give them that because kangaroo and wallaby mothers are so loving; they’re always attending to their joey.

“Over 23 years, hundreds of orphaned joeys have come into our care – those we’ve raised to release ourselves, those for whom we provided immediate care in the beginning and then passed on to other carers, and those who died. We’ve been touched by all of them.” 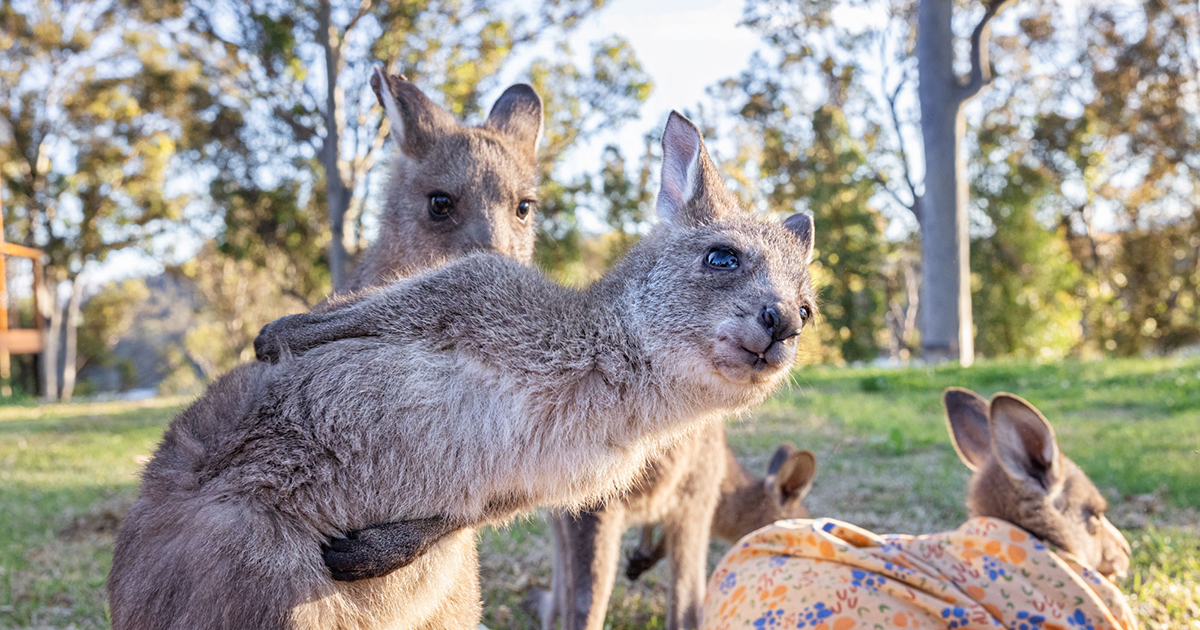 “You come across some of them who are so amazingly generous. Ricky was a little orphan joey whose mum was deliberately run over by some hoons coming through the forest.

“He was terrified when he came to us but he was a lovely little fella, and as he grew he became the protector of all the smaller ones. Ricky would put his nose into the pouches of all the new orphans who came in and reassure them, tell them it was all ok, and as they got older he’d befriend them and teach them about being kangaroos.

“Ricky, of his own accord, took on the responsibility of looking after all the other orphans. They’d come in feeling so scared and alone, then Ricky would come to speak to them and they knew they had a guide and protector.” 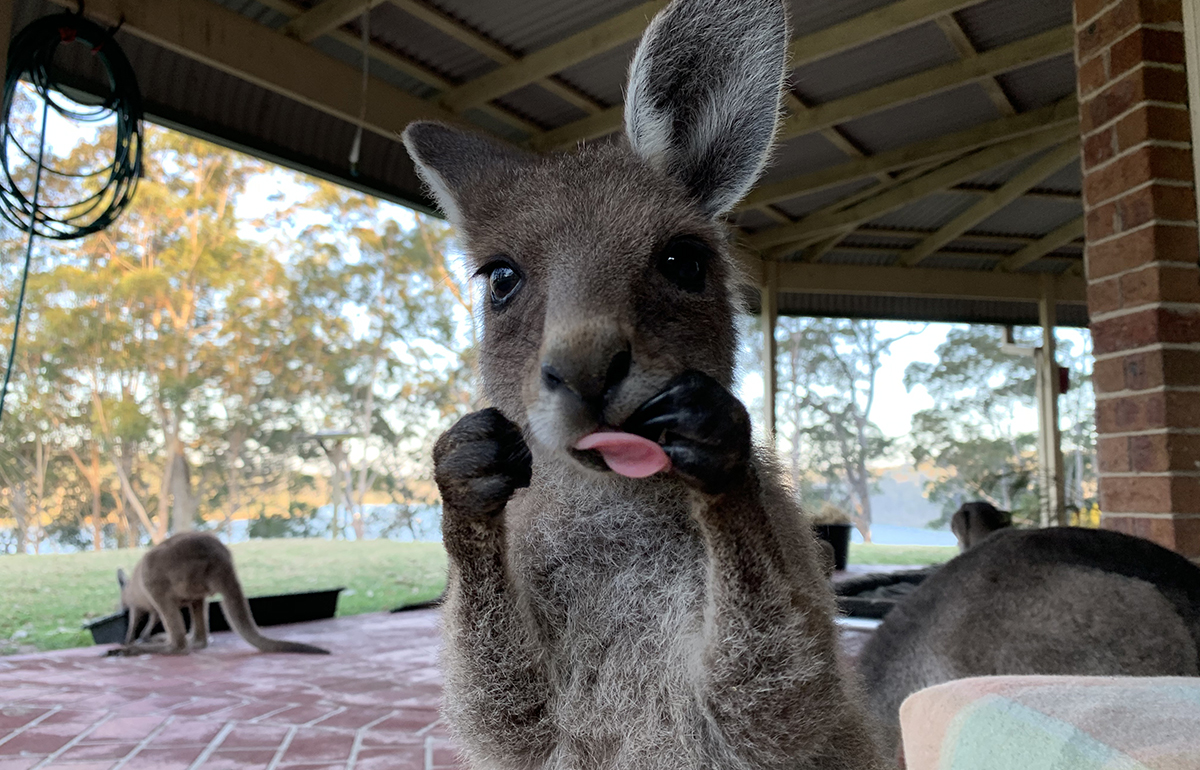 What is it like being a dad to an orphaned joey?

“It’s different for us because where we’re situated, we deal with a lot of shooting orphans who’ve seen their mother and family group all shot right in front of them. Rescuing orphans after a shooting incident is hard, because they are terrified and so sad.

“They’re still looking for their mum and they’re crying out.

“They’ll be trembling, they’ll have a runny bottom, they’ll push away the bottle, they might kick out or they might be non-respondent and glazed over.

“You can just see it in their eyes that they’re traumatised.

“As a result of the terror they’ve experienced, it can take a really long time for them to feel safe. You have to provide a lot of love and care and calm energy. You give them the biggest cuddles and let them hear your heartbeat. You give them everything they need so that they trust you enough for you to be able to raise them, because they’re just tiny little children who’ve lost their mum.

“Once you get to that point where they trust you, it’s wonderful for both parties, because they’re going to be in care for a long time – until they get to a size where they can be safely released. 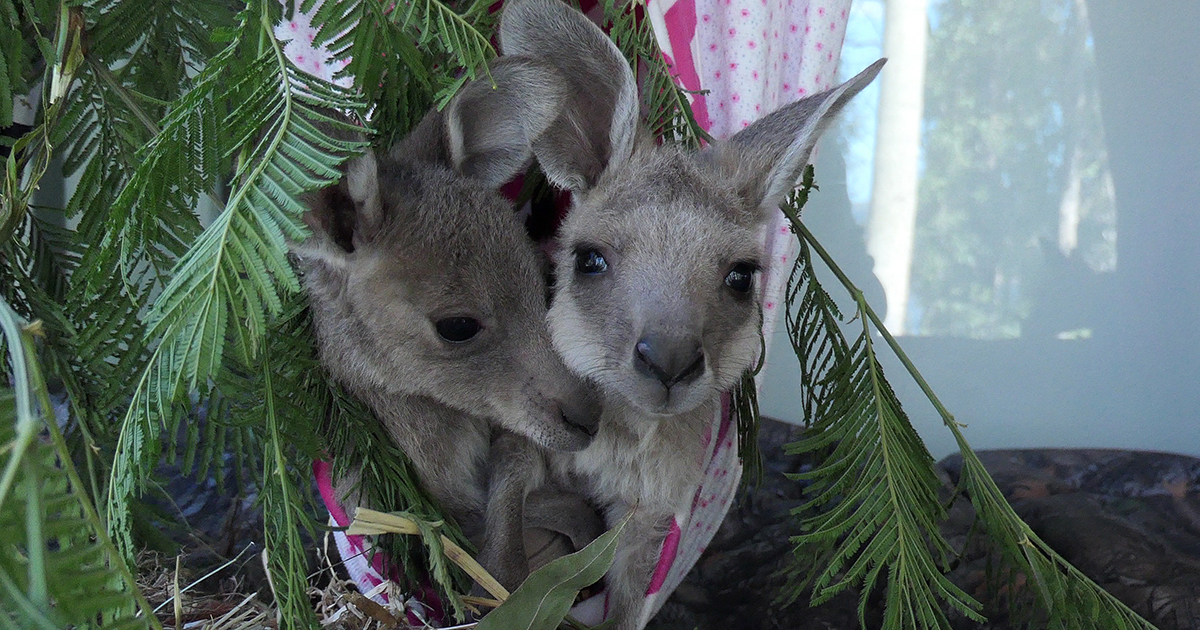 “We provide each joey with a cloth pouch which becomes their little safe space. You and the pouch become their surrogate mother.

“Often it’s really hard to get them to take their milk, because it’s so artificial. It’s a bottle with a teat rather than a warm pouch connected to their mother’s heartbeat. Then you have to feed them up to six times a day as the mum would, so it’s a 24-hour job.

“You’re feeding them at 3am and then need to be up again by 7am. A lot of wildlife carers are lucky enough that they have a partner they can work as a team with, like me and Diane, but there are also people out there doing it by themselves.

“Once the joeys are bigger they’ll be coming in and out of the pouch. We always make sure they've got a brother or sister to play and explore the world with, someone they can rely on hopefully for the rest of their life. You have to then show them the world and help them integrate into the local family. 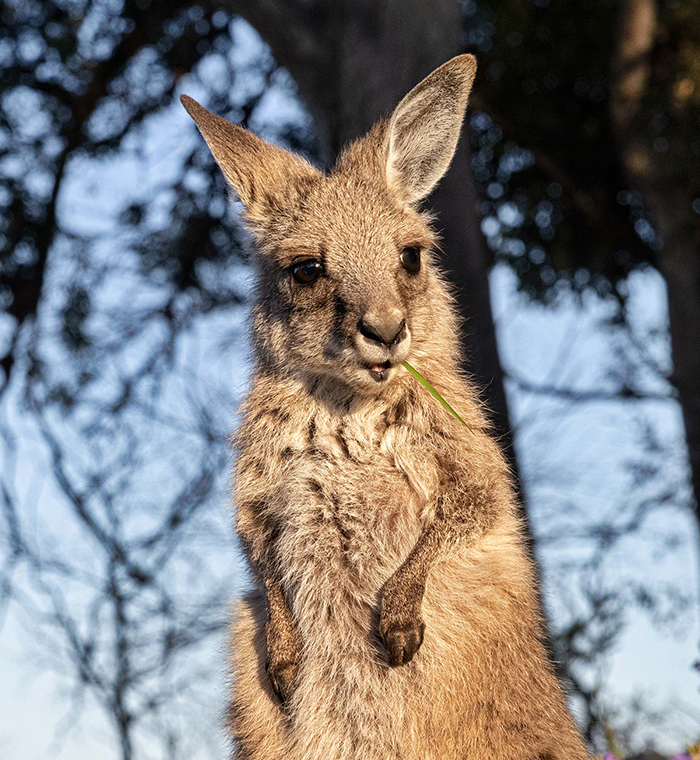 Why are they orphans?

When it comes to these little kids, most have been left orphaned because their mother was either hit by a car (and some kind person stopped to check her pouch and found them in there) or their mother was shot.

In NSW, kangaroos are shot for three main reasons:

It is the Government–sanctioned commercial kangaroo industry that keeps a steady stream of orphaned joeys, heartbroken, terrified and traumatised, pouring into Greg and Diane’s loving arms and home-made pouches.

But in a bitter twist of fate that says a lot about Australia’s respect for its wildlife, Greg and Diane’s sanctuary is surrounded by properties frequented by commercial shooters, who supply kangaroo victims for the highly profitable ‘k-leather’ and petfood industries.

This means that after all the love and care they give these orphans, they must send them back out into a cruel and dangerous world. Many don’t make it. 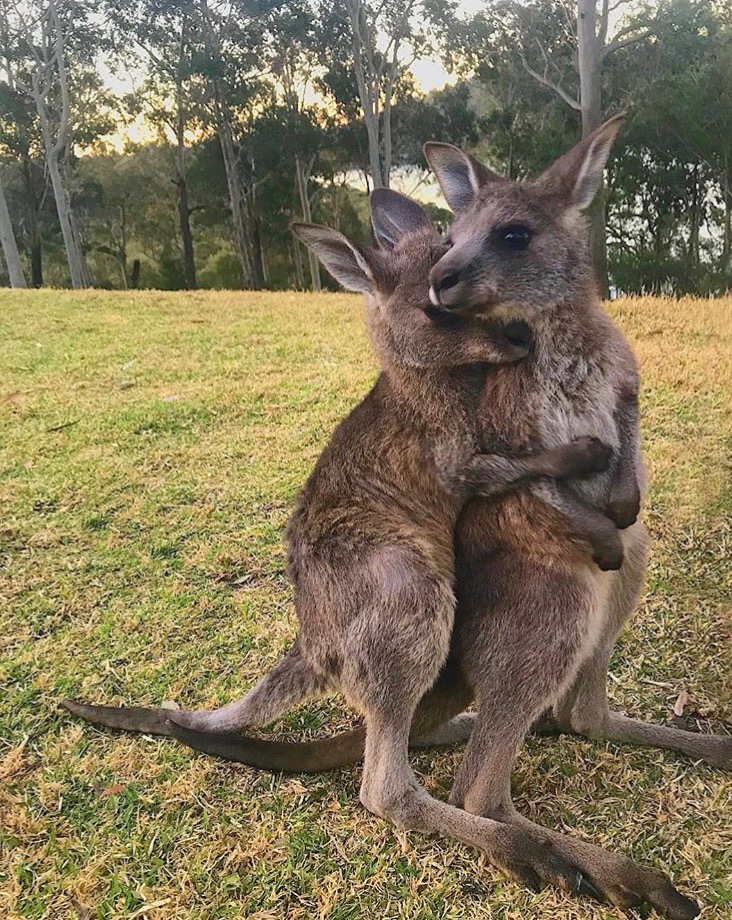 “Four years after he came into our care, there was a night of shooting on one of the adjoining properties and we found Ricky the next morning.

“After a night of shooting you always have to go and check for survivors. Even after the shooter goes, at 2am or 3am, you can hear little joeys calling for their mums – mums who are now hanging from a hook on the back of a ute.

“With at-foot joeys, the mum will have been shot right in front of them. The shooter will come up to collect her body and the joey will run off into the darkness. The shooter will butcher the shot kangaroos right there in the field – cutting off their heads, removing their intestines – before hanging them on the back of the ute.

“This means that sometimes we’ll find joeys who’ve returned after the shooter has gone, looking for their mum, and recognised her smell there in the butchering site. We’ve found joeys who’ve laid down and died nuzzling their mum’s severed head. They die of exposure but I’d also say they die of a broken heart.

“People don’t know that when they’re serving up kangaroo petfood to their dog or their cat, this is the tragic story behind it.

“When we found Ricky, he’d experienced six or seven hours of shooting in that paddock and he was just standing alone in a field near the fenceline, distressed. The shooters had pursued him all night and he’d watched while his friends and aunties were killed. He was trying to get back to our sanctuary, where he knew it was safe, but he was incredibly debilitated.

“He was so relieved to see Diane, and because of their relationship she was able to put him in a big bag, lift him over the fence and carry him home. Even at four years old, he was willing to accept that help because he was so desperate. They’re not big tough animals, they feel pain and sadness, and even at 4 or 5 they’re just like big bubbas.

“We brought Ricky home, but he died from stress and probably from heartache. Kangaroos and wallabies are very sensitive and fragile animals, and when you place them under that much stress, well, he just didn’t survive. He was only four years old, and he never got to see his life out. He never got to become a father. But he was like a foster dad to all the other orphans.” 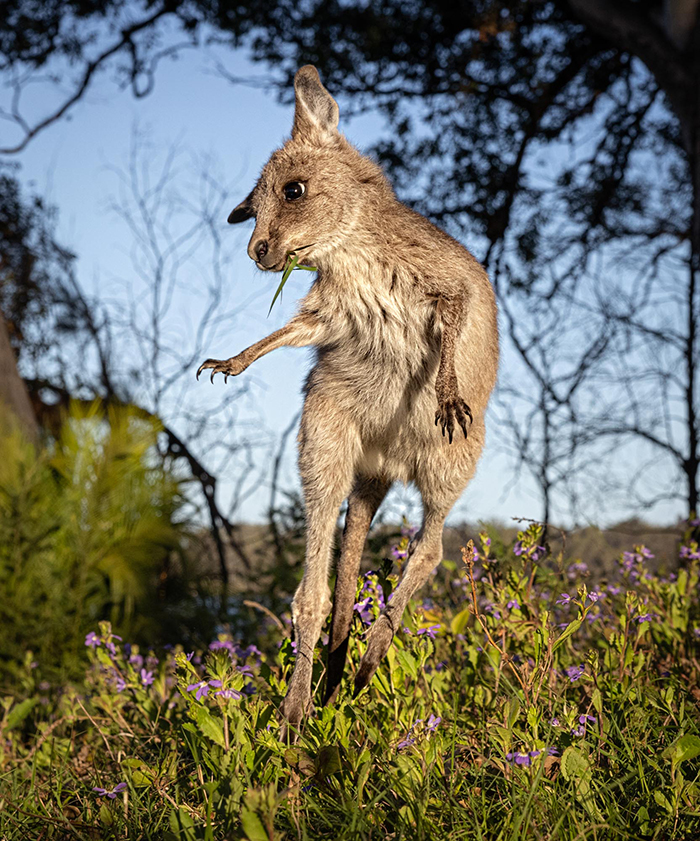 You can support our fight to end the cruel commercial kangaroo industry by becoming a Party member ($44/year or $22 concession) or donor. We will never stop fighting to protect kangaroos.