How the Morrison Government failed animals 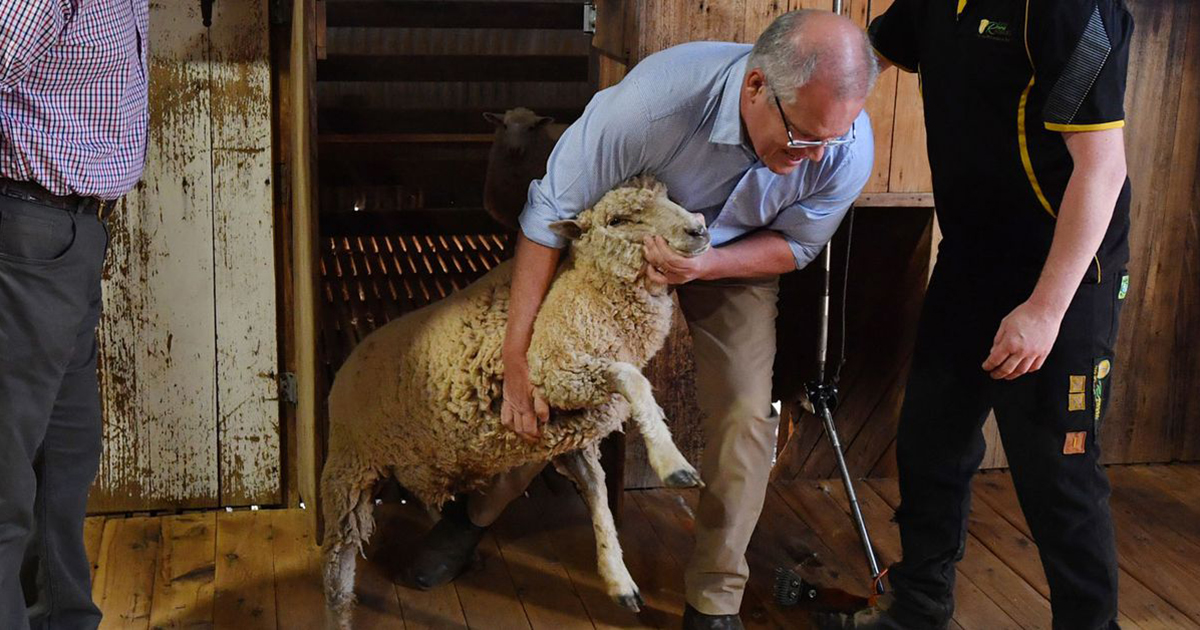 Only one more week till we can throw this Government out! Imagine how it will feel to say goodbye to nine long years of Liberal-National rule… As humans, we’ll say goodbye to increasing inequality, the rise of insecure work, the “downward mobility” of wages, horrific negligence in Aged Care, and an epidemic of homelessness, especially among women over 50.

We’ll say goodbye to the people who brought us the deadly Robodebt scheme, the deadly bungling of the vaccine roll-out and quarantine, and who failed – even scorned – to address violence against women.

Goodbye to the Government who failed our essential workers in every way. Who demonstrated a complete lack of care for the difficult and important job of nurses, teachers, paramedics and transport workers. Goodbye to the people who made an absolute joke out of corruption... 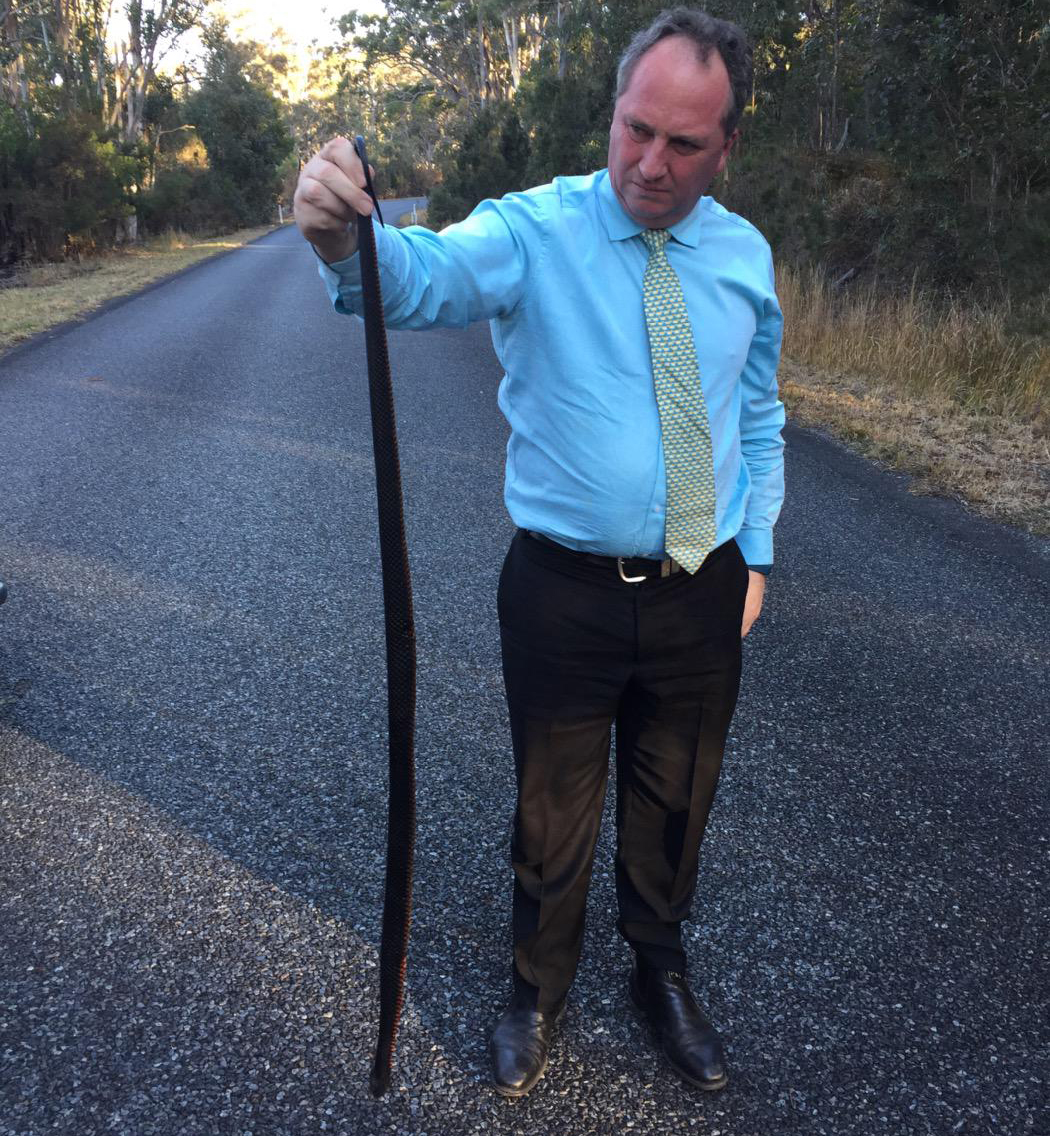 Turned Australia into an internationally recognised deforestation hotspot. We’re now sitting next to Laos and Mozambique as one of the worst deforestation hotspots in the world. We are the only developed nation on that list. And the driving cause? Animal agriculture. They’re killing our wildlife so they can put more cows and sheep on live export ships. 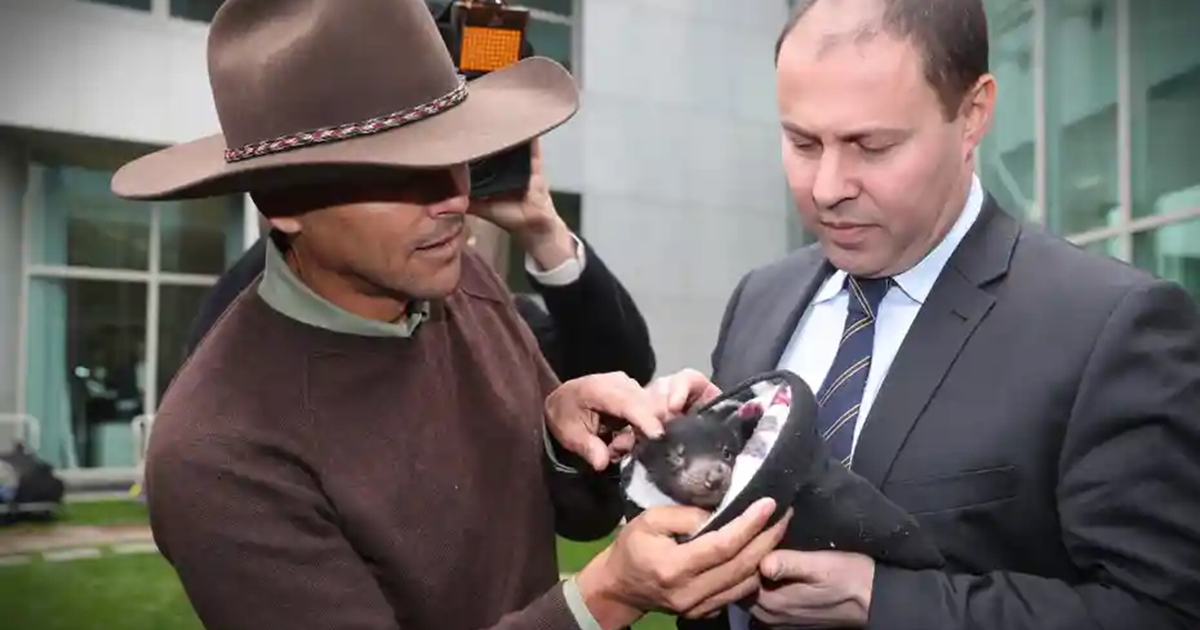 Treasurer Josh Frydenberg prods a Tasmanian Devil joey, in a Guardian article detailing how farmers’ associations lobbied him not to grant critically endangered status to woodlands eligible for protection in Tasmania, NSW and Queensland, when he was Minister for the Environment and Energy in 2018. Image: Mike Bowers/The Guardian

Actively harmed the Great Barrier Reef when it was already struggling under global warming. This is one of the most unique areas on the planet, a world heritage site visible from space, critical to the health and ecology of our planet. It’s also critical to the Australian economy bringing in a wealth of tourism and scientific research.

The Great Barrier Reef has been allowed to bleach and sicken on this Government’s watch while they not only failed to address climate change, but increased coal transport through the area and approved more mining upstream. The Adani coal mine means 500 more coal ships through the Great Barrier Reef every year, not to mention the knock-on effect of all that fossil fuel. 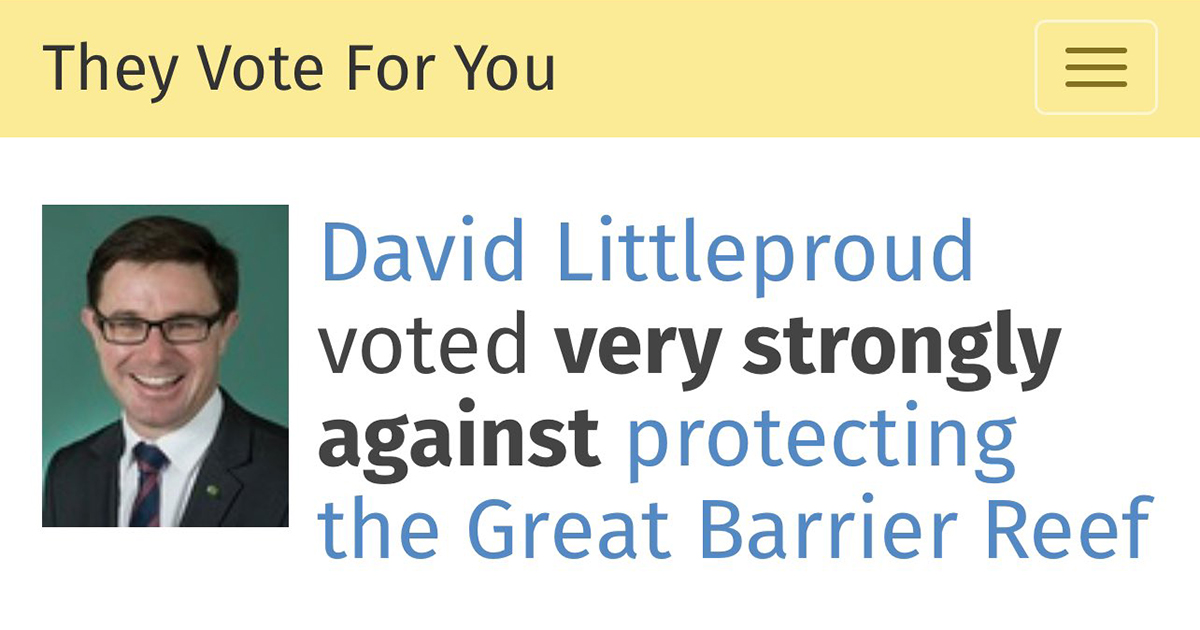 Total inaction on climate change while Australian animals drown and burn in unprecedented weather events. Both farmed animals and wildlife have suffered extraordinarily in the catastrophic floods and bushfires.

A strong government would have taken climate change as a business opportunity and invested early in renewables.

A kind government would have seen that the ones suffering the worst impacts from climate change, the most vulnerable, are the animals, and taken steps to support emergency workers and rescuers to help them.

Constantly sought to increase and expand the live export industry, despite Australians clearly telling the Government we want it completely shut down. Despite evidence that the conditions on those ships are, at the best of times, unbearable. Despite whistleblower footage of sheep cooking alive. 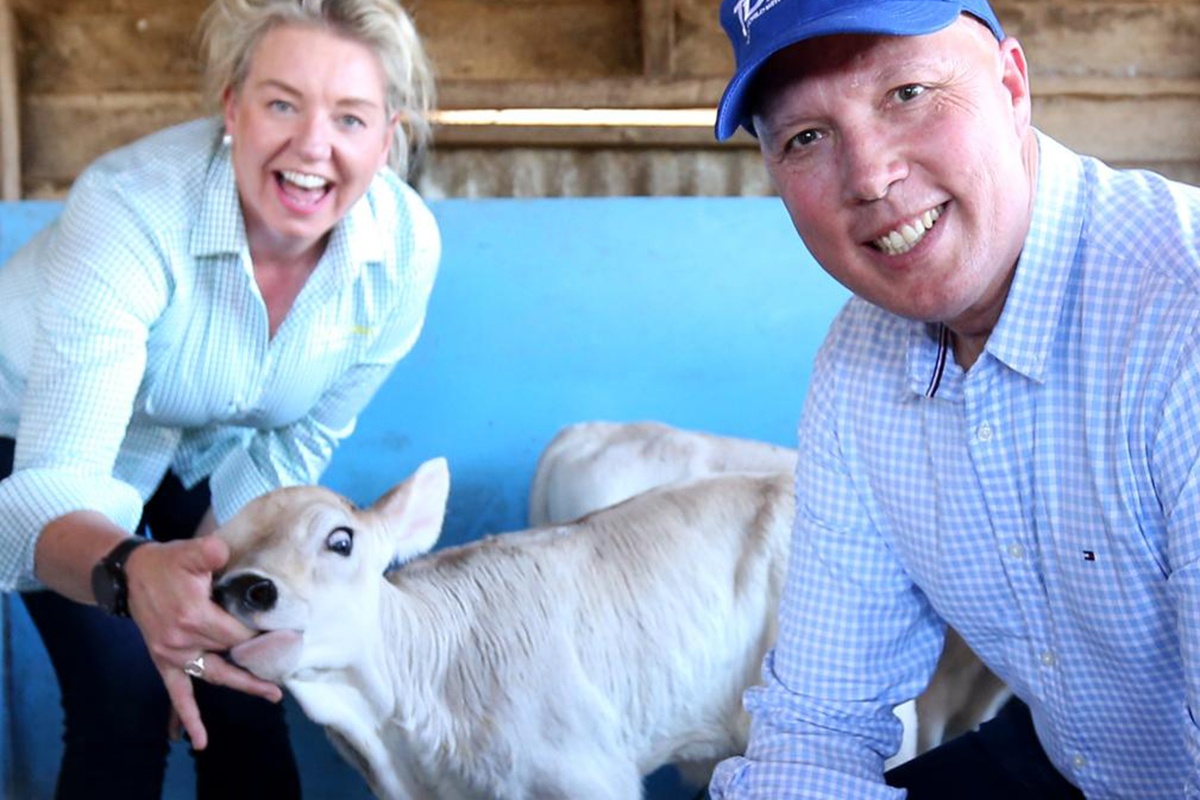 Made absolutely zero improvement to farmed animal welfare, with NSW Agriculture Minister and Nationals MP Adam Marshall going above and beyond by announcing he does not want to ban battery cages ever. This flew in the face of the states’ agreed upon (and already lax) plan to phase out battery cages for hens by 2036… This was a low bar. And the Liberal-National Government showed us they could sink even lower.

Persecuted our most iconic animals. While every animal is important, there’s a unique hypocrisy in a Government who on one hand weaponises ‘Aussie values’, and on the other, takes every opportunity to try and wipe koalas, kangaroos, dingoes, wombats and crocodiles off the face of the planet. See Failures #8–12 below.

The Government’s landclearing amendments would have been harmful enough alone, but they’ve also given open slather to developers in critical peri-urban areas. This means koalas are now officially endangered, and it’s not going to get better for them till we throw this Government OUT. 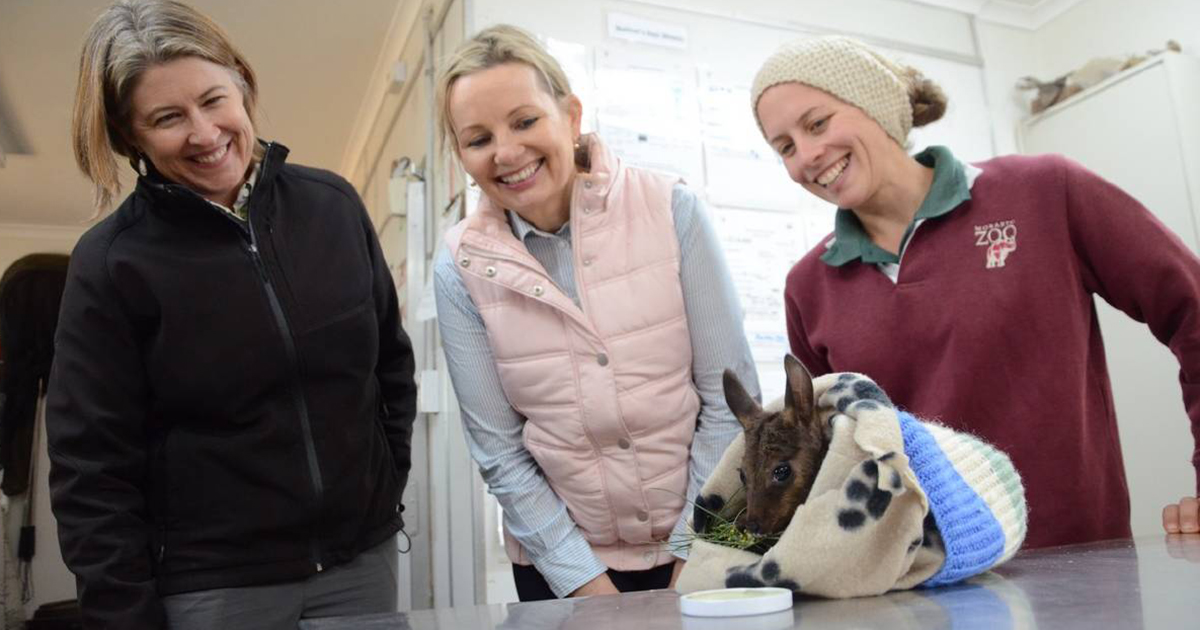 Federal Environment Minister Sussan Ley takes a moment off from overseeing the 'management' plans which allow kangaroos to be gunned down in their thousands every night for leather and petfood, to smile near a baby warru (black-footed rock-wallaby). The management plans she approves recommend that after a mother is shot, the joey is bludgeoned. Image: Peri Strathearn

This Government has completely sold out our gentle, harmless, most iconic animal, the kangaroo, to a profit-hungry commercial industry and they don’t care what they do with them. This Government has watched on, eyes closed, as thousands of kangaroos, including mums with joeys in their pouches, are shot every night so their skin can be sold to Nike and Adidas, and their dead bodies used in petfood. This Government recommends that after a mother is shot, her joey is yanked out of her pouch and bludgeoned on a truck’s bullbar. We haven’t seen that in the tourism ads…

This Government has allowed the money-grubbing cattle and sheep farmer federations to instate a ‘National Wild Dog Action Plan’ which is working hard every day to exterminate our native dingo. Even after research showed that over 99% of so-called “wild dogs” are dingoes. 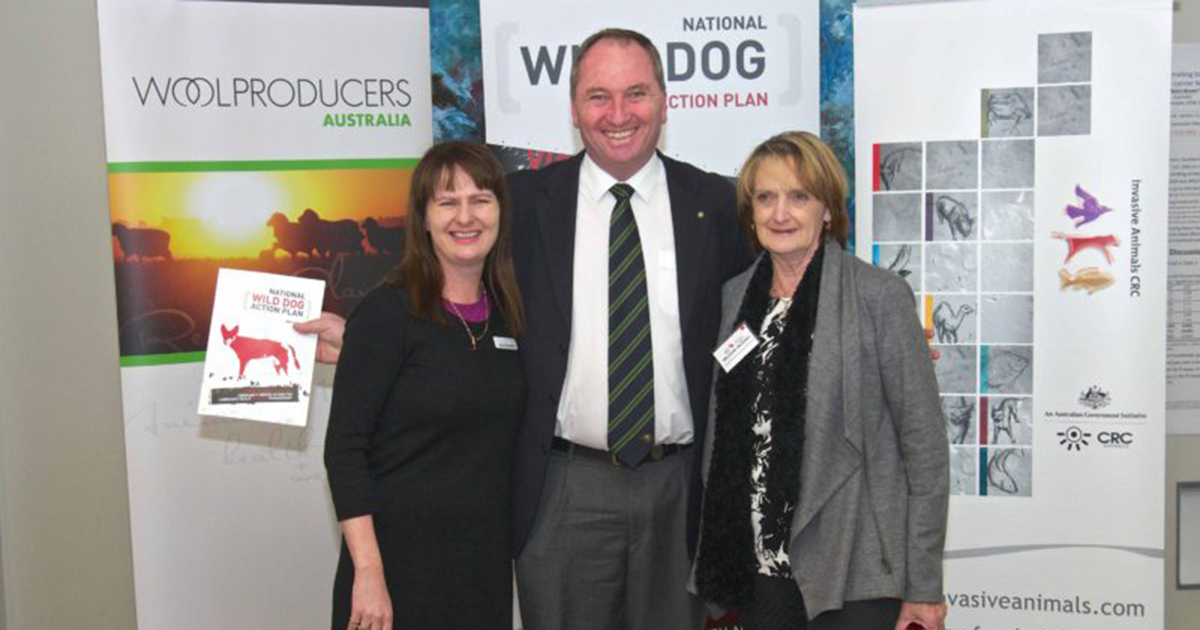 On this Government’s watch there is now a new, horrific breed of factory farm. The NT and Queensland are rife with them. Our mighty saltwater crocodiles are now living in tiny cells in factory farms, in their thousands, so their skins can be used in high-end fashion. You’d have to see it to believe it.

Completely abandoned independent wildlife carers to deal with a decimating, deadly epidemic of mange in wombats. Mange kills wombats slowly and painfully; some carers have described it as “the most painful death imaginable”. It has been left to independent volunteer wildlife carers to come up with solutions – and fund those solutions themselves. They are doing this completely unsupported, and it’s wombats who are losing out. We are losing wombats. 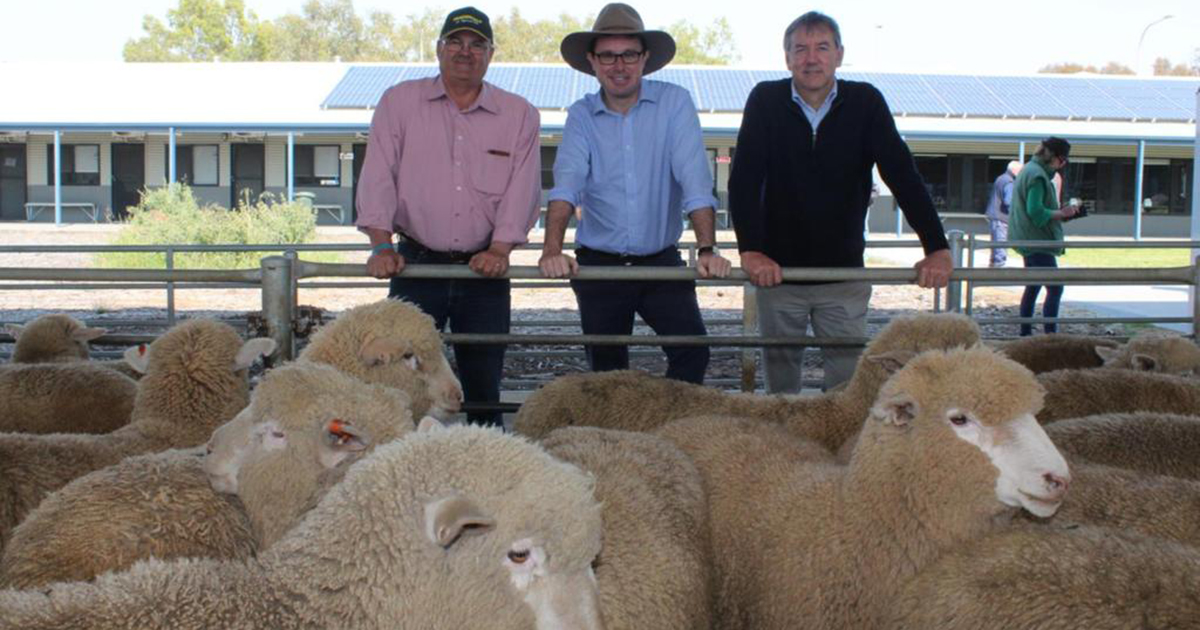 Federal Agriculture Minister and Minister for Northern Australia, David Littleproud, poses in a rural-style hat in front of some sheep who don't have room to turn around. Image: Michael Traill

Devastated the health of our rivers and wetlands by allowing unregulated floodplain harvesting, leading to apocalyptic mass fish deaths. The Liberal-National Government’s floodplain harvesting scheme has been called “a tragedy for rivers” by the Nature Conservation Council of NSW. 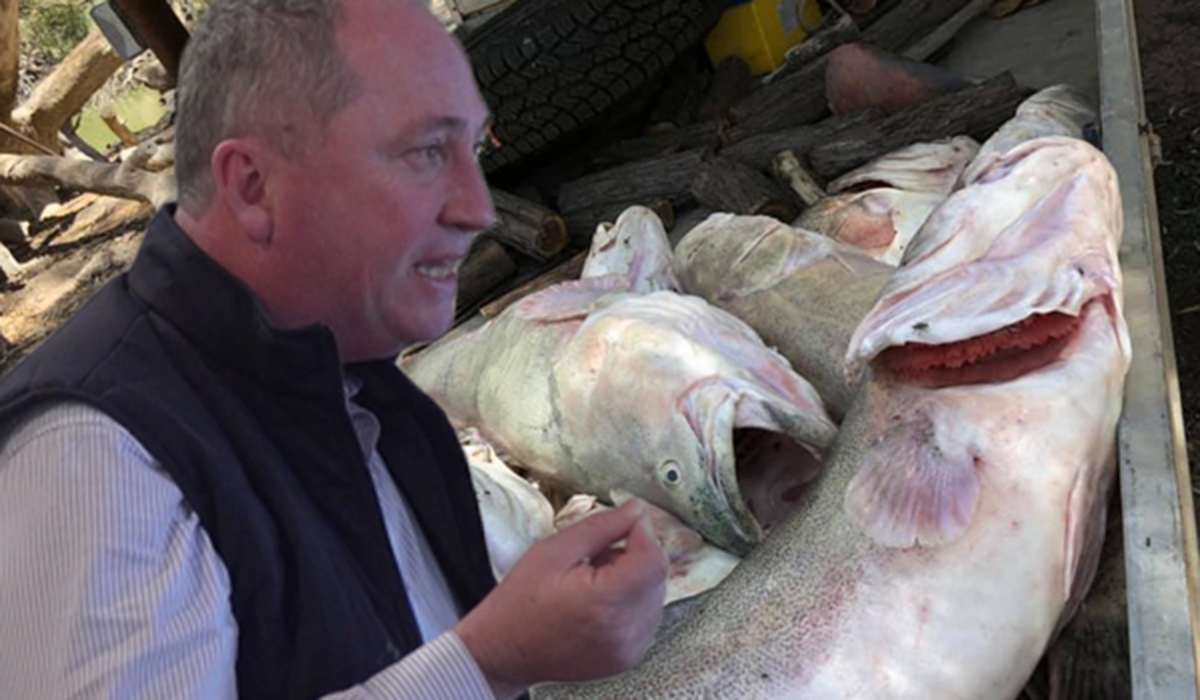 After up to a million fish died in a 40 kilometre stretch of waterway at Menindee Lakes in 2019, Deputy Prime Minister Barnaby Joyce gave an interview "rubbishing claims corruption within the Murray Darling Basin Authority is to blame". Image: 2GB Radio

And finally, in a list that is by no means exhaustive… A disrespect and disdain for nature and animals that permeates everything under their rule, from the cutting down of sacred, centuries-old trees to increasing magpie culls to their rampant funding – not just support, but taxpayer funding – of horseracing and greyhound racing. The Liberal-National Government’s disrespect and disdain for nature permeates everything while they are in power.

This Government has devastated the lives of animals in this country and devastated our natural environment.

We’re bringing a dedicated voice for animals into the halls of power and it’s never been more needed.

If we don’t get in, the full power of your vote carries through to whoever you put second, and so on down the line. So make sure you put the worst parties last!